What is Beautiful People?
Beautiful People is for writers. Every month, Cait and Sky post a list of 10 questions for you to answer about your characters.


It’s designed to help you get to know your characters – their quirks, their personality, their flaws, and who they are. You can satiate your curiosity about this feature: HERE. Please join us!

1. What were your writing achievements last year? ✒
2.Tell us about your top priority writing project for this year? ✒
3. List five areas you’d like to work the hardest to improve this year. ✒
4. Are you participating in any writing challenges? ✒
5. What’s your critique partner/beta reader situation like and do you have plans to expand this year? ✒
6. Do you have plans to read any writer-related books this year? Are there specific books you want to read for research. ✒
7. Pick one character you want to get to know better, and how are you going to achieve this? ✒
8. Do you plan to edit or query, and what’s your plan of attack? ✒
9. Toni Morrison once said, “If there’s a book that you want to read, but it hasn’t been written yet, then you must write it.”  What are the books that you want to see more of, and what “holes” do you think need filling in the literary world? ✒
10. What do you hope to have achieved by the end of 2016? ✒ 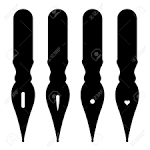 1. WRITING ACHIEVEMENTS IN 2015.
Just coming out of the closet about writing was a gigantic achievement for me last year. My reluctance wasn't based on confidence in my writing, but rather the rolley-eyed looks that I knew I would get from some of my friends and acquaintances. Also, I didn't want the authors I have befriended to think I was supporting them because I saw them as a stepping-stone, or an "in" for my writing. I truly love their books and promote them to get more great stories from them published for me to read. Devour. Hug. Okay, so maybe there is a little selfishness dribbled in there. I want them to keep feeding my addiction!

3. FIVE AREAS FOR IMPROVEMENT.
Figuring out chapter delineation is normally a big head scratcher for me. Giving skin color, and/or ethnicity descriptions without sounding cliché. Knowing when to stop fleshing out secondary characters is a problem for me. I need to fine tune building backstory without stepping over the info-dump line. I also need to sit down and seriously establish older characters' birthdates and what would have been going on in the world during their childhoods.

4. WRITING CHALLENGES.
None, except for this Sunday Flash Fiction prompt that a college days friend of mine tags me in every week. He gives us five words we have to use and a limit of 50 words to tell a story. I am way out of my league on those and have only participated once. Reading the other writers' entries is motivational though.

5. CRIT PARTNERS AND BETA READERS.
Hidden Magic was first written many years ago as a way to tide my son over until new Harry Potter books were published, so those stories have been listened to by him and critiqued as a Middle Grade aged listener; which I think is important because the stories have to interest, entertain, and be understood by them, not adults. He has read some of the re-writes I did last year and still approves. I trust him because we made a pact when he first started doing musical theater that we would never tell the other they were doing something well if they weren't, so to save us from public embarrassment. Ha ha. Plus, with the stories being serialized, all of you will be my beta readers! However, I will need a crit partner for another story I wrote, while unemployed after my first college stint, that I am converting from an Adult Fantasy to YA.

6. BOOK RESEARCH.
None. If I research a book related topic I always do it via the internet.

7. PICK A CHARACTER DEVELOPMENT.
Hmm... these types of questions are difficult. I probably would delve deeper into my MC 's grandfather's character because although he is absent most of the time in the events that are already written, he will come into play more if I decide it is worth continuing the story in other Wattpad "books".

8. EDITING AND QUERY.
I have been doing mild editing while going through my handwritten notebooks, where the Hidden Magic stories were originally put to paper, to type them into documents, but they are pretty solid. If I decide to continue with new material I will probably do the same, now that I am thinking about it. Ha! I don't like to type first drafts. There is something about handwriting them that is a catalyst for creativity in my brain. I won't be submitting any queries for Hidden Magic, the Wattpad serial, but maybe the other book at a much later date.

9. WRITE THE BOOK YOU WANT.
In my other WIP, Democratic Socialism is in place, and I feel it is important to express that all human beings deserve a basic standard of living with shelter, food, and healthcare. Some people hold the misconception that socialism means the wealth gets spread out until everyone has the same amount, no matter how much they study in school, or how hard they work. This is not so, and I would be showing how this works in a fantasy setting in another world.

10. BY THE END OF 2016...
I want to have what would constitute an entire book's worth of writing serialized on Wattpad (Hidden Magic). I would also like to revamp a Horror short story I wrote for a college creative writing class and maybe submit it to some anthology competitions. It was well recieved by my nit-picky professor, so I feel it has good bones. And, in a best case scenario, have the entire first book of the Other WIP (I have decided that is its working title, hehe) typed as a document; maybe ready to shop around early next year.