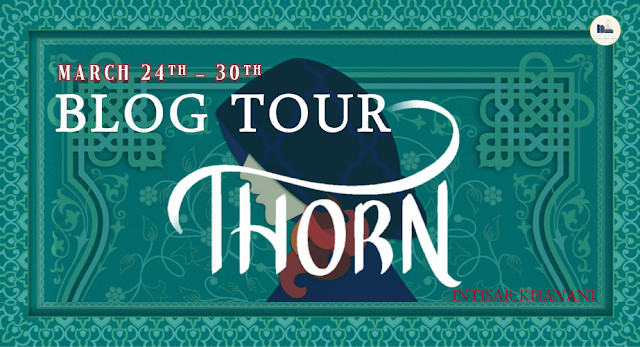 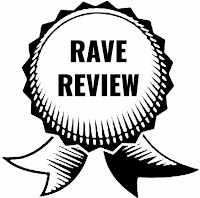 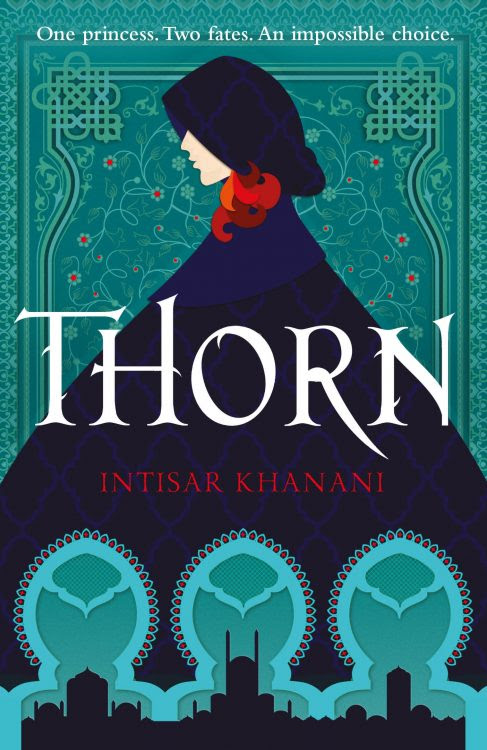 A princess with two futures. A destiny all her own...
Between her cruel family and the contempt she faces at court, Princess Alyrra has always longed to escape the confines of her royal life. But when she’s betrothed to the powerful prince Kestrin, Alyrra embarks on a journey to his land with little hope for a better future. When a mysterious and terrifying sorceress robs Alyrra of both her identity and her role as princess, Alyrra seizes the opportunity to start a new life for herself as a goose girl.
But Alyrra soon finds that Kestrin is not what she expected. The more Alyrra learns of this new kingdom, the pain and suffering its people endure, as well as the danger facing Kestrin from the sorceress herself, the more she knows she can’t remain the goose girl forever.
❇

With the fate of the kingdom at stake, Alyrra is caught between two worlds and ultimately must decide who she is, and what she stands for.

KEEP READING FOR A GIVEAWAY 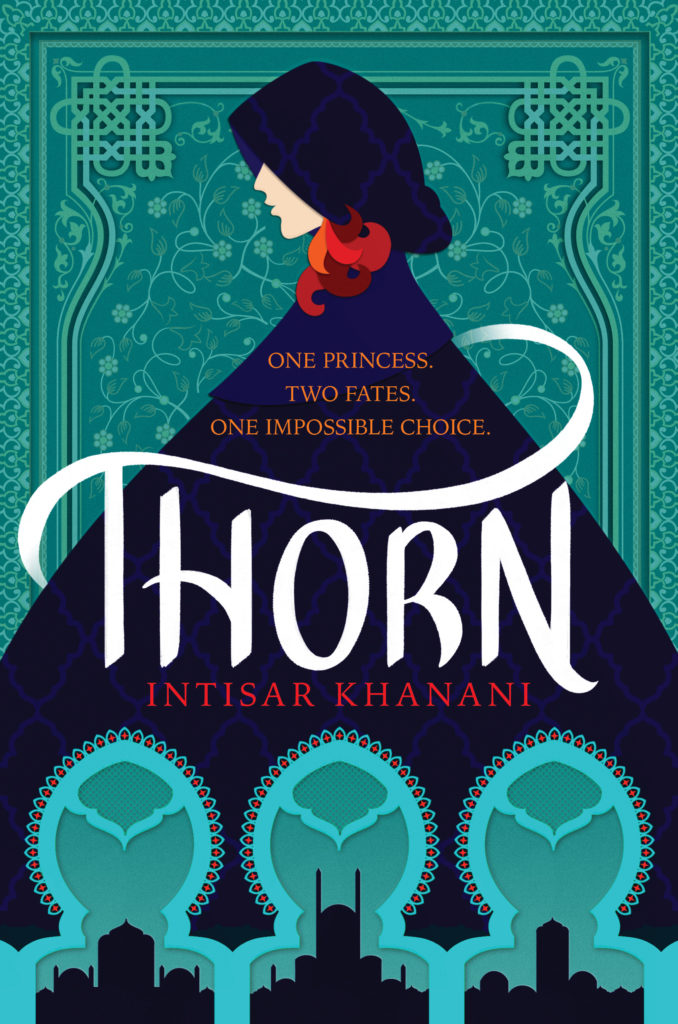 I have a long history with Thorn by Intisar Khanani. I had to go to Goodreads to see exactly when I had first read its self-published version. I started reading it in December of 2014 and finished it January 1, 2015. I turned right around and started reading it again on January 22, 2015. I wish I could remember what was going on in my life at that moment because I know Thorn became a comfort read for me. I read it again in May of 2016, and I buddy read it with another blogger in February of 2017. She also loved the story. That makes it over five years I have been singing the praises of this retelling of the Goose Girl fairytale. 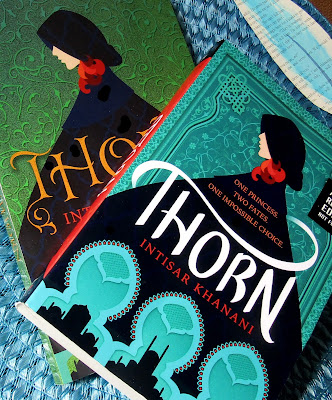 In October of 2017 Intisar let us know the celebratory news that Thorn and another book set in this world, The Theft of Sunlight, had been picked up by HarperTeen! It was such big news there was an article on the Publisher's Weekly website about the book deal. I was so proud of Intisar, excited, overjoyed, and elated. Then came the terrifying news for me... the story was to be extensively edited and when the ARC dropped in my lap it was TWICE AS THICK as the self-pub paperback! I was afraid to read it because I wondered if it would still be a comfort read for me.

Why was the original Thorn such a warm hug book for me? It's about a character who lives in a pretty nice place and she has most everything she needs, but her family who live there aren't that great. In fact they are horrible. Then through no fault of her own she gets dumped in a not so nice place, but finds being free of the hatred of her family might just be worth the extra struggle. Accepting where she was at the moment as she planned for the future, a very uncertain future, made Alyrra a heartwarming and relatable character for me.

I suppose you want to know my final verdict on the edited and much longer HarperTeen version? Well... I loved it! There were some changes which made me sad, but they were replaced with more changes that made me happy. The horse element was still there, front and center and very dear to my heart, there was found family, and the wind! I adored the wind functioning almost as a character in this story. The wind has always been an energizing element in my life.

This new version makes the reader think a little more. There are several plot elements which strongly connect to the current political climate, and you will find yourself rooting for the people who are looked down upon. Some of the relationships are deepened and you will shed a tear more than once. Many times I wanted to crawl into a gathering of friends scene and join in. There is extra action in this edited version which I know appeals to a lot of you, too, so even if you have read the original Thorn you will find new and exciting things to love about this one!

I know I didn't tell you much about the story, especially the characters, but it was on purpose. I'm the type of person who likes to go into a book as blind and unaware as possible, and I love this story so much I want you to have the same fresh unfolding experience, too. 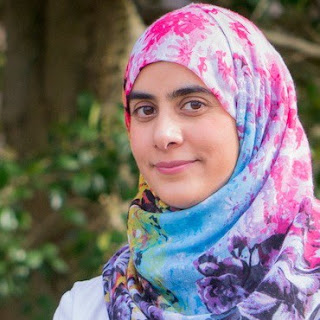 GOODREADS
BLOG
FACEBOOK
INSTAGRAM
TWITTER
@booksbyintisar
Intisar Khanani grew up a nomad and world traveler. Born in Wisconsin, she has lived in five different states as well as in Jeddah on the coast of the Red Sea. She first remembers seeing snow on a wintry street in Zurich, Switzerland, and vaguely recollects having breakfast with the orangutans at the Singapore Zoo when she was five. She currently resides in Cincinnati, Ohio, with her husband and two young daughters. Until recently, Intisar wrote grants and developed projects to address community health with the Cincinnati Health Department, which was as close as she could get to saving the world. Now she focuses her time on her two passions: raising her family and writing fantasy. Intisar’s debut novel, Thorn, was picked up by HarperTeen and will be re-released in Winter 2020. In the meantime, she’s hard at work on the remaining books of The Sunbolt Chronicles. 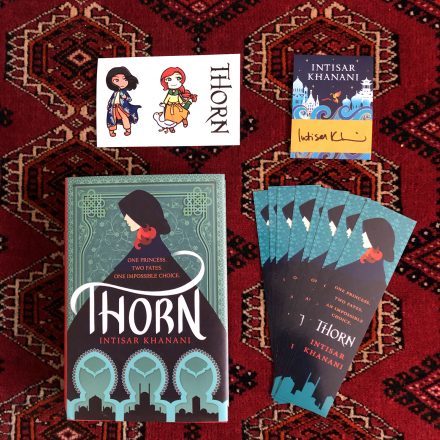 A Thorn Bookmark, a set of Chibi Stickers featuring Thorn characters, and a signed Bookplate.
PLUS Digital goodies (worldwide):
A PDF of Brambles – a Thorn prequel short story so you can jump into Alyrra’s world now!A PDF of The Goose Girl – the original fairytale with annotations from yours truly in the margin. A coloring page of three Thorn themed bookmarks.
❇
All you need to do to enter is send a proof of purchase (or screenshot of your library hold), your name and address to khananipreorder@gmail.com. T&Cs apply!
UK entrants: Hot Key Books rocks and can mail you physical goodies as well as the digital. Check it out here: http://hotkeybooks.com/thorn-pre-order/
Non-US/UK entrants: I really, really wanted to offer you the physical goodies, but postage is a bear. If you would like to cover the cost of an international stamp ($1.20), I can absolutely mail you the goodies as well. E-mail in your proof/screenshot for your digital goodies, and I’ll link you up so you can do that.
Original link: http://booksbyintisar.com/thorn-pre-order/
The universal book link for purchasing Thorn is: www.books2read.com/thornin