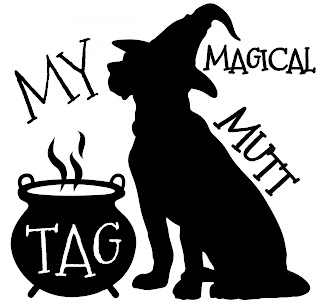 Remember... if you do this tag in August, enter your link HERE to be entered for a $12 international e-gift card for Amazon or Better World Books.

1. Who is your favorite magical or Fantasy genre dog? It can be from a movie, television show, or book. Why?
I would say Padfoot from Harry Potter because I love Sirius Black's character and in the movie he's a Scottish Deerhound and I adore them.


3. If you had a dog familiar, daemon, or were an animagus and changed into dog form, what combination of breeds would it be? It has to be a mix because the tag says magical mutt, ha ha! Why would you choose them?
I would love any small dog that is black and scruffy looking. It doesn't matter what the mix is if that is the outcome. I have seen some cute Brussels Griffon + Chihuahua mixes. I have always wanted a small black, so ugly it's cute dog.

4. What would your familiar's, daemon's, or your dog form's name be?
Well, if it is that small scruffy dog I want, it would be Varuca (as in Varuca Salt from Willie Wonka). Ruki would be a cute nickname.

5. If you had a magical dog what three powers would be important for them to have? For example: speech, invisibility, finding lost objects, levitation, changing into another animal. Why?
Speech! I would love to have a talking dog. I think they would be honest, too, so if you asked its opinion you could trust it. Levitation would be nice because they could get things from high shelves for me. Changing into another animal would be great, like a cute guinea pig, but not so great if it was an elephant or a lion. Unless it was a friendly lion.

6. If your magical dog could talk what accent would it have, if any?
A french accent would be interesting. Oui oui!


7. If your fantasy dog had one odd magical habit (ex: making the water disappear from the tub at bathtime), or wore some strange talisman on its collar (ex: a vial of wolf blood to help them run faster), what would it be?
Why did I write such a difficult question?! Ha Ha! Maybe they could accio dog treats so I would have to keep them in a locked cupboard. I hope they can't also manage alohamora. Maybe they would have an eagle's feather on their collar because dogs don't see so well and it would give them better sight. It would be funny if every time they sneezed the doorbell rang.


8. If you were going to write a Fantasy story with a canine main character what would the premise be and what title would you have in mind?
Hmm... about a young wizard who worked a spell to change the family's pet goat into a dog and didn't realize there was a mirror in the room, or he says something wrong, and it turns him into a dog instead. His family thinks the boy ran away and the dog is a stray, so they kick him out into the street. After several months of living as a stray he hears about a witch who can talk to animals, and he sets out on a quest to find her so she can help him. The problem is he needs to find her soon because after a year the spell cannot be broken. I would call it The Beast Witch of Downhill. It's obviously a Middle Grade story.

My DDOS co-host, Jolene, is having a giveaway for a stack of great dog books! You can find it: HERE.

Check out these Magical Mutt tags...
Jolene from JO'S BOOK BLOG
Annemieke from A DANCE WITH BOOKS
Barb from BOOKER T'S FARM

Please join us!
Posted by La La in the Library at 1:52 PM