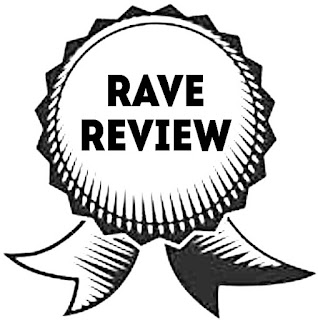 The book is written in lyrical free verse, just like the other book I read from this author, ROOT BEER CANDY AND OTHER MIRACLES, which was my top MG choice for 2016.

The one thing I appreciated in both of these books is the MCs think and react appropriate to their ages. I have read several Middle Grades over the last couple of years where the elementary school age characters think like 40 year old mental health therapists. Kids want to relate to the characters in MG! I love it when young characters are sometimes confused or angered by what the adult characters do, and/or say; just like in real life.

Green is also skilled at portraying family dynamics in a realistic way.

One element that had my heart from the beginning was Mike was both a rescue shelter dog and a less adoptable choice having only one eye.

The major themes in this story were what makes a family and what makes a place home. The author used more than one contrasting example for each.

I buddy read this book with my DOG DAYS OF SUMMER co-host, Jolene, from JO'S BOOK BLOG. We decided to ask questions, so here we go...

1. The family has to leave their home suddenly and only take the essentials; what is something you would grab that you couldn't live without?
If the cat is a given... I would grab my two sentimental guitars. My 1969 Gibson SG, which was my first electric guitar, and my Alvarez Fusion acoustic which was my college instrument. They also happen to be my two most expensive guitars. Ha ha. I will say one thing, this story made me think about getting all of my physical photos scanned and digitized soon!

2. Have you ever been in an emergency situation similar to the one in the book?
Our city has had mandatory flood evacuation areas three times in the last ten years, and during the second flooding we came within three blocks of being evacuated. It was pretty unnerving because our cat would have freaked out if she had to go to a shelter. We live on the second floor, though, so I can't compare it to someone fleeing a fire, or living on the first floor in a flooded area. The only bad thing for us was our immediate neighborhood was surrounded by water for nearly two weeks, and we had to buy food from our local gas station convenience store at highway robbery prices.

3. The main character in the book helps out at the shelter where they are staying during the evacuation; have you ever volunteered during an emergency?
No, sadly, I have not. I do a lot of volunteering, but none of it has ever been disaster related.

4. The main character can't find her dog, Mike, before they leaveleave; would you ever leave your pet in an emergency?
Only if there was no other option. I would never leave them to take anything material in their place. I would make sure they could escape to save themselves if that was the situation. I love animals to the moon and back, but if it was between a pet and a human life, I'd choose the human life. Well, not if they were mean people. Heh heh.

5. Have you ever lost a pet?
Yes. My mother, sister, and I went to visit one of my aunts, who lived about five hours away, for the weekend and instead of boarding the three dogs we had, my mother was paying my other aunt to come over and tend to the dogs in our own kennel. I showed her how to feed and water the dogs without having to open their inside kennel area, and how to hose down the outside runs without opening the gates because my Irish Setter was crazy and we were afraid she would get loose and get in the road. We got a call the next day and my aunt said that my sister's collie Little Bit (Bitty) had gotten loose and ran into the woods and didn't come back. We left immediately to come home. We walked in the woods calling her name. We drove up and down the roads and walked fields calling for her for over a month. We called the two local shelters every day. We put up flyers at the civic center, gas station, and post office. We never found her. Of course we questioned why my aunt had opened Bitty's run and she said she couldn't get a poop hosed out of the run, but she was told under no circumstances to open the gates. Now that I have answered this question I have thoughts about it that I didn't have before. Bitty was extremely shy around strangers and would not have come out into the run if my aunt was there, she would have hid in her bed inside. My mother and that aunt were always getting in snits and things would come to the surface at family get togethers all the time. I am wondering if she wasn't stewing about something my mother had said, or done, and it was payback. About three years later a friend of mine said that she had seen a collie that looked exactly like Little Bit in a fenced backyard just down the road from where my aunt lived. She said it was noticeable because Bit had a "fly away" left ear that stood straight up. I never told my mother or sister, and I never went to check because I would rather think it was her being well cared for than having a look and it not being her. My heart still aches about it now. 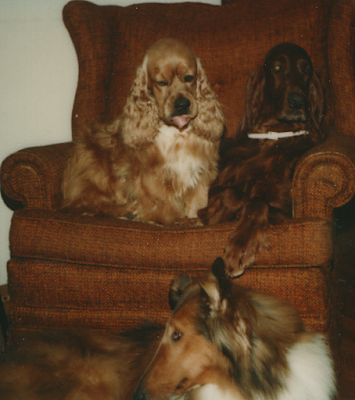 I know I have better photos of these three. Maybe by next year's DDOS I'll have all my dog photos copied and organized. Top left is October, the cocker my mother saved from death row in a Pennsylvania shelter, top right my setter Flirt (I didn't name her the breeder did) and on the bottom Little Bit. She was given to my sister for obedience trials from a show friend because of her ear, but she was too shy to compete.

6. One of the themes in the book is the feeling of home and how it is different for everyone; what does feeling at home mean to you?
Now it would be wherever my son lives, but that won't be forever, so it would be anywhere safe with my cat, my Kindle, and at least one guitar. And a coffee maker. Ha ha. The things that would make it special would be a scruffy little dog, a piano, tall windows for letting in tons of sun, a small outdoor garden space, and my bookcases.

1. Do you read many Middle Grade books?
For a grown woman I think I read my fair share. Ha!
I know a lot of bloggers will read fluffy Contemporary YA as a palate cleanser; I read MG.

2. Have you read other books written in verse? Did you like them?
I think the first book I read written in verse was BROWN GIRL DREAMING, but I didn't realize it was until after I had finished because I listened to the audiobook and it wasn't apparent. That was the first time I think I was aware that there are readers who absolutely loathe free verse. I mentioned above that the author's other story I read was in verse and this week I read another DDOS book, LOVE THAT DOG, which is also written in verse. I am almost positive I have read another, but right now the title escapes me.

3. There was a push several years ago to publish more YA and MG books featuring broken and troubled families, so there were books for kids living in similar situations to relate to, but recently there has been a call for more stories with stable families because children need to also read about families who are thriving, to show it is possible. This story's MC had a solid family unit; what do you think about this?
I like to see both in YA and MG stories. I think that YA stories can stand up to the entire book being about negative impact on the MC, but I still like to see a secondary character benefiting from and maybe sharing their family with the main character, especially if the stable family unit is nontraditional. I also like it when a story shows that even solid family units can have problems. In MG I like to see both represented. This story had a character who came from a broken home, and a character trying to make a nontraditional family work. This is best because one of the main themes for MG is the main character trying to figure out their place in the family, where in YA the MCs are trying to figure out their place in society.

4. Missing Mike had both happiness and sadness in the ending. Do you think Middle Grade books should have at least one positive occurance/experience in the conclusion because the books are for 7-11 year olds?
Yes. As I have said before MG aged readers are known for their worrying, especially about the health and safety of family members. I think that there should be some uplift at the end in some way to counter balance a negative occurrence. This story did it well.

Hop on over and read Jolene's review and answers: HERE.

Have you read books written in free verse? If so, what did you think?
Posted by La La in the Library at 7:06 PM