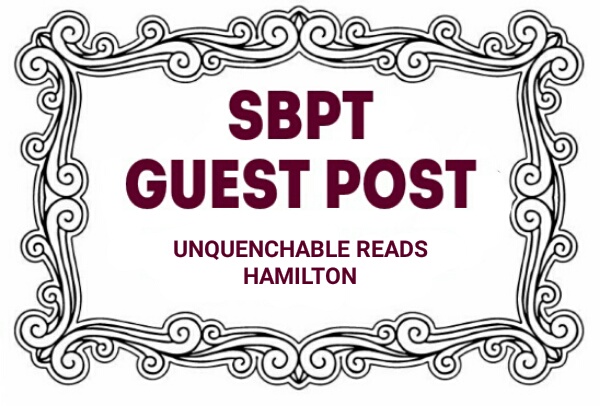 Welcome to my fifth of seven Sunday guest posts for the SUMMER BLOG PROMO TOUR hosted by THE BOOK BRATZ!

Hi! I'm Anna from Unquenchable Reads and I love broadway. Broadway musicals are just so good at story telling and the songs are very catchy. Anyway, my top favorite at the moment is Hamilton (with Waitress barely behind it). I haven't had a chance to see Hamilton yet, but the cast recording has been on repeat since January. Hamilton is about Alexander Hamilton, one of America's founding fathers, and his life story. Alexander Hamilton was originally portrayed by Lin Manuel Miranda. I love Hamilton for multiple reasons. I love the history aspect of it and the music is phenomenal.

Eliza and Angelica are such strong people (I'd say Peggy too, but she's barely in the soundtrack). They are also two of my favorite people in the musical. I also love Lafayette.

I love every song from Hamilton. Even the ones that made me cry. So here's my top ten in no specific order.
I have cried a lot listening to Hamilton because........ ughhhh it's so good. Special thanks to Danielle (Hamiltrash) and Kelli for pushing me to listen to this for a while.
⚫
Thanks, Anna! I know I hope to be able to see the show live someday.

Anna is a reader, tweeter, bookstagram, youtuber/blogger, aspiring writer, and a
Disnerd. She can be found at Barnes and Noble, local bookstores, conventions,
home reading, or at Disney World (sometimes). She mostly reads Young Adult, but
every so often, she will be caught reading a New Adult novel.
Thank you for having me La La! I hope you booklovers have a lovely day and happy reading
Posted by La La in the Library at 9:48 PM