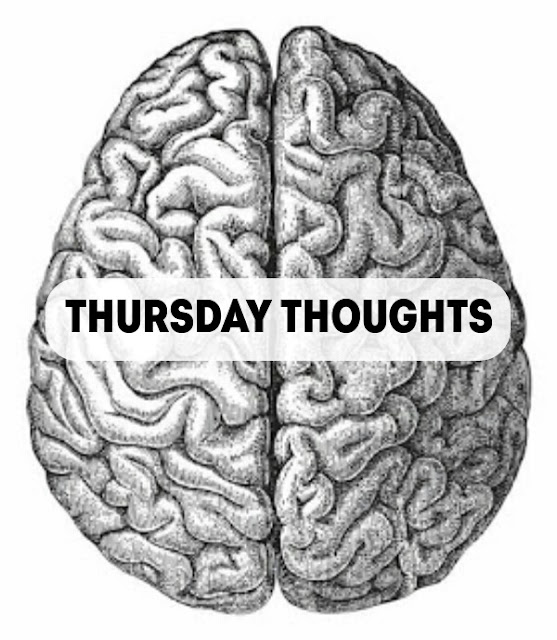 Michelle from IN LIBRIS VERITAS shared an article on Facebook about matching up your Myers-Briggs Personality Type to famous authors. I was excited to do this, but then realized the only thing I remembered about the test I took a couple of years ago was that I am an Extravert (you will find out the reason for my memory blip below), so I set off to retake the test only to find out there are many different free online versions now. Then a lightbulb flipped on in my head... what if I took several tests and compared them?  I did just that, and here is what I found. The tests are listed in the order I took them.

The Myers-Briggs Jungian personality tests have been used for everything from career path choices to choosing a perspective mate, but I think most people take them based on pure curiosity.
▫▫▫
Before we start, J - judging does NOT mean "judgmental". The first time I saw this I thought, WHAT?!

ESTJ
This was the first test I came across after Googling Myers-Briggs. The test only had three choices for each question: AGREE, SOMEWHAT, DISAGREE. I answered "somewhat" to about 65% of the questions, so this one was probably not that accurate for me. You can take the test: HERE.
▫▫▫
As you will see all but one of the other tests have me set at ENFJ: N for "intuitive", not "sensing", and F for "feeling" not "thinking, so I think I am correct in assuming this PsychCentral test can be off a little because of its generalized format. In its defense, I think the intuitive/sensing and feeling/thinking traits are almost 50/50 for me.

ENFJ-T
This is one of the two tests Michelle took, and it is the test Jamie from PERPETUAL PAGE TURNER mentioned in her IF WE WERE HAVING COFFEE post. I love that feature, by the way. You can take this test: HERE.
▫▫▫
The extra letter in this initialization is about whether you care what people think of/about you. Mine was Turbulent (care what people think about me), but it was so close to 50/50 it proves I do waffle back and forth between caring and not caring. It depends on the situation.
▫▫▫
You will also see that each of the tests below will have a personality type category. This one says Protagonist, but other sites have their own. Below you will see ENFJ also called The Teacher, and The Developer. 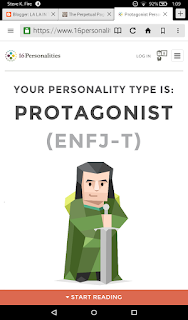 ENFJ
This was another test I answered with multiple middle noncommittal answers as indicated by tne low percentages. You can peruse this test: HERE.
E -  67%
N- 19%
F - 25%
J - 6%
THE DEVELOPER
▫▫▫
This site gives you a list of famous people with your PT. Mine were: Martin Luther King Jr., Bono, and Nelson Mandela.
⬛⬛⬛

BEOAD
THE TEACHER
This is the test I took a couple of years ago, and the reason I only remembered the Extravert component when seeing the Myers-Briggs initialisms. It was the only letter in common with the Myer-Briggs. I was identified as The Teacher at that time, too.
B - Balanced (emotinal reactions) 60%
E - Extravert 79%
O - Open (nontraditional) 87%
A - Agreeable (not guarded) 75%
D - Disciplined (not spontaneous) 68%
▫▫▫
There was a "neuroticism" calculation, and again like in the 16 Personalities test almost 50/50 at 40%. So I am still a waffler here.
▫▫▫
If you opt to take the second section of this test, like I did, I think this version was the most detailed; although you don't get the Myers-Briggs PT initialisms. You can test yourself: HERE.
▫▫▫
I think this one was my favorite.
⬛⬛⬛

EMPATH
This would have had my nod for best test except to get your Myers-Briggs designation you have to pay $29.00. However, when it gives your category it will list four corresponding PTs, and the one you have gotten from other tests will probably be included. I am pretty sure this test would have designated ENFJ for me, also.
▫▫▫
It does, have this great page with all of the PTs on it. You can click the icon to your PT initialism and it takes you to a page with personality details and a nice little video about your type: HERE.
⬛⬛⬛

My conclusion is I am basically ENFJ with shades of gray.

So what did I come away with from taking all of these tests? One thing is that I am solidly an Extravert (right now), but I could have told you that myself, without the test. Ha ha. The other is that I am basically in the middle with all the other trait sides. Yes, I like to plan trips in detail ahead of time, but if the plan doesn't work I don't say forget it I want to go home, I am very adaptable and still have fun. I might like my desk top uber neat, but half of the drawers will contain a tangled mess. I like a rigid, formal, traditional framework for projects, but will be open for sound shortcuts, and imaginative branching anchored to that strong framework. Do I want the hard, cold facts and figures about a situation? Sure, but I will also take into consideration what made those facts and how the decision will impact the future. I think these tests will have stronger meaning for those falling in the trait extremes.
▪▪▪
Another thing the tests made me realize is things can change. If I had taken this test as a preteen, I would have been an INtrovert. As a teenager I was as in the middle of things as one can be. I also know I have grown more open minded as I have gotten older. Plus, my spontaneity and risk taking has seriously lessened over the years. I also had crippling stage fright when it came to solo musical performances in my teens and twenties (I would sometimes throw up before/after shows), which I don't have anymore. I never had panic attacks before my son was born, and if I had taken this test during the time he was 3 - 13 years old I probably would have tested as an INtrovert again, I got more and more reclusive as time went on. Now I am back in the thick of things again. So my message is some individual types can/will change.
▪▪▪
My hope is that people will use these personality type designations for good and not as excuses for less than stellar behaviors. Heh heh.

Here is an amusing Wired article I liked about personality typing.
▪▪▪
By the way, my matching authors were:
GOETHE
ERASMUS
(the other two I didn't know)

So this is what I want to know from you...
1. How many tests did you take?
2. Were they all the same or different?
3. What is your PT?
4. Did any of your designated traits surprise you?
5. What famous people and authors share your PT?
Posted by La La in the Library at 4:41 AM